I saw an ad recently that showed an old car. No big deal to most. To me it was a time machine that took me back nearly 40 years. It looked just like my first car!

My first car was a station wagon – a 1968 Plymouth Satellite to be exact. Yes, I am that much of a nerd. 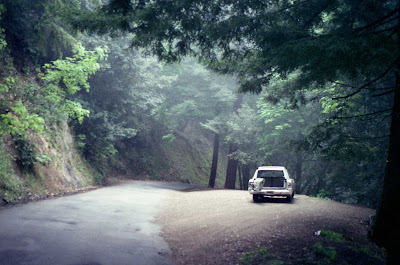 Ride with me in that Plymouth Satellite time machine to a chilly Wednesday evening in Fall 1980. The sun was setting when I dropped off a couple of kids at their remote farm in Grayson County, Virginia.

I worked for their parents. I did a couple of chores before hopping back in my olive-green freedom machine. I threw the column shifter into reverse, gave it some gas and lifted the clutch.

The car moved back a couple of feet, wobbling like…

One look confirmed it. The driver’s side front tire was flat.

I was more than a little irritated. You see, I knew the spare was also flat.

That wasn’t enough. I walked back around the car to use the house phone when I noticed the front passenger side tire was also going flat! I was not going to make it to youth group at church that night.

I called my parents. They agreed to pick me up, but I would have to meet them at the road, a quarter mile down the driveway.

By the time I removed one of the front tires and the spare so we could get them replaced, it was completely dark. A single bulb on the porch shed weak light on the yard. Clouds blocked most of the starlight. The woods along the driveway blocked the rest.

You should probably know that I had lived in that area less than two months at this point. Before that, I lived in the suburbs of San Francisco. I had no concept of the total lack of light I would experience that night.

As the driveway entered the woods, a creek could be heard on the right. The crunch of gravel under my shoes reflected off the embankment on the left.

Every now and then I heard noises in the woods. Visions of mountain lions and bears flooded my imagination as I tightened the grip on the pocket-knife in my hand. The pounding of my heart almost drowned out my footfalls.

I tried to stay in the tire ruts as the driveway curved down to the road. I took small steps to keep from stumbling – a strategy that wasn’t completely successful.

I heard no traffic ahead. This was about as far back as you could get in the country. The few local residents were already home.

Eventually I heard wood under my feet, marking the bridge at the end of the driveway. The clouds parted mercifully, leaving a small patch of starlight in the middle of the road. I stood in that patch for the minutes that felt like hours until my parent’s car approached.

This Sunday I'll teach 4th and 5th graders about trusting in God. I have to admit that I had far more fear than trust that night. Nearly 40 years has taught me that I need not fear the unknown. When fear creeps up like total darkness, I know that I have a light that I can trust in.

Wil Clarey has to deal with many of the same fears that I did. If you haven’t figured it out, his move from LA to Virginia is based on my experiences. In fact, his grandparent's farm is based on the farm where I experienced this story.

We have all had experiences of fear and trust. Where is your trust. Feel free to share yours in the comments here or on the Facebook post of this story.

Posted by Richard Solano at 6:01 PM