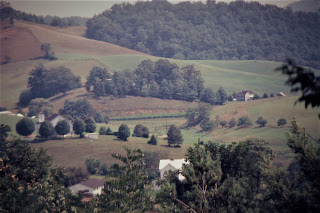 Last weekend, we visited my wife’s parents.  They still live in the same house the she grew up in. Janet lived in that little town until we got married just over 4 years ago.

As we drove the small-town streets to her parent’s house, Janet recognized someone crossing the street ahead of us as an old acquaintance.  That sort of thing doesn’t happen much here in the suburbs of Denver.  I found myself feeling a little jealous of the roots that she had.

When I was growing up, my parents moved a lot.  Between parents’ job changes and their divorce, I had lived in eight homes in six towns by the time I was 18.  Most of that time was in the suburban areas of Fresno and San Francisco.

From age 16 to 18, I lived in Grayson County, VA near the small town of Fries (pronounced freeze).  I took the above photo from my room.  Despite having lived there for only two years, the little town of Fries is what I look back to as my home town.  I could point to the fact that I graduated from Fries High School (Go Wildcats!).  It goes way beyond that, though.

A few years ago, I was returning to the area to support my sister when her husband passed away.  Coming up highway 89 from North Carolina, I passed a sign at a community center that read, “Benefit Gospel Sing.”  I thought, Yep, I’m home.

At 16, this long-haired wierdo from California was welcomed to the area with a graciousness that I have only ever found in the South.  When I returned for that funeral, I saw an outpouring of love and help to my sister that defied description.

I doubt if I will ever be able to return to Fries to live.  It and the rest of the New River Valley will always hold a special place in my heart.  I may not be able to go “home,” but I can try to bring that sense of home to my suburban neighborhood.   I suggest we all bring a little but of that southern hospitality where-ever we may be.  Perhaps it will feel like coming home.


Posted by Richard Solano at 7:52 PM No comments: 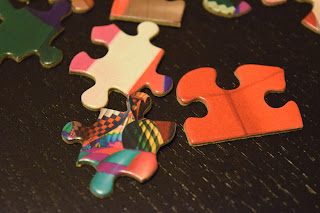 A year ago, I asked my siblings to come visit Mom for her 79th birthday.  I was afraid that she would not recognize them on her 80th birthday.  A year later, I wish I could say that I was wrong.

Mom still seems to enjoy my visits, though it is becoming increasingly rare that she knows who I am.  Today she enjoyed the attention she got as we video chatted with family, but she had no clue who we were.  Even after I told her that I was her son, that fact slipped her mind just minutes later.

Dementia is a weird disease.  It has crept up slowly on Mom for years.  She fought it with reading and word search games and jigsaw puzzles.  Now it has all but won that battle.

Mom has always been a little scatter-brained.  Just like me.  She is human with all her faults and failures and strengths and love.  I could sit here and recount all her short comings.  That would seem pointless in her current condition.  I would rather look back at the mom who taught me to care for others.  Mom who bandaged my scrapes.  Mom who encouraged me to try harder.  Mom who proudly held her grand-babies.  Who shared photos of the same with anyone who would look.

Life’s too short to hold on to the negative.  It’s too short to not listen to those stories of years gone by.  Many of those stories are gone for good now, vanished from her memory.  Those that are left are so jumbled up as to have little or no correlation with the truth.  I will cherish the memories that mom has passed down to me.  I will continue to visit her if just for the fleeting smiles when she gets some glimpse of recognition in her mind.

All this is to say, cherish the time you have with your parents – your whole family for that matter.  It slips away far too quickly!  Feel free to comment below especially if you have any amusing or special parent stories.  And then, have a chat with your mom.

Posted by Richard Solano at 9:24 PM No comments: