I am taking what I learned at the writer's conference and polishing my manuscripts.  So far I have completed the first two chapters of "A Kerryville Summer."  You are the first to see it.  Enjoy! (and please send feedback):

They say that everyone is really good at something.  I’m not good at much, but I can fold an awesome paper airplane.  And that’s where the trouble began.
Between classes, I had bragged to my friend Zach that I could make the best paper airplane.  Zach and I were lucky to be assigned seats next to each other at the back of Mr. Cochran’s 8th grade math class.  That’s where we were secretly making paper airplanes.  I was a little afraid that I wouldn’t get the folds just right working on it in my lap in the shelter of the desktop.
Mr. Cochran was droning on about stuff that I learned on my own a couple of years ago, so I didn’t feel bad about not paying attention to him.  If Zach missed something I could always explain it to him later.
You could say that Zach was my best friend.  But then, he was my only friend.  I don’t start conversations, so I don’t meet new friends unless they are like Zach.  At the beginning of the school year, he came up to me and introduced himself.  While his personality is totally different from mine, we both like video games, especially Minecraft.  We are also both into electronics and other nerdy kind of stuff.  He is very outgoing and has a bunch of other friends.  Still, he makes time for me.
My plane was complete and so was Zach’s.  Zach mouthed that we should throw them forward when Mr. Cochran turned around.  This is crazy, but awesome, I was thinking.  We watched.  He turned.  We lifted our planes.  He turned back.  We hid them quickly.  Mr. Cochran gave a suspicious glance our way but went on talking and turned to write something on the whiteboard.
That’s when we struck.  Both planes took to the air above the heads of the kids in front of us.  As I thought, mine flew better and farther.  Too far!  Mr. Cochran turned around just as my plane came right at his face!  He just barely dodged it and grabbed it as it bounced off the whiteboard.  The room erupted in laughter.  For a moment, I was in heaven.  Other kids were laughing at something I did that was not embarrassing.  Visions of sudden popularity flashed through my brain.
Mr. Cochran’s eyes blazed, and face reddened as he turned.  “Silence!  Who threw that?!”
The fingers pointed towards me were too many to count.  Mr. Cochran stared straight at me.  I swear I could almost see steam coming from his nose and ears.
“Mr. Clarey, you will head straight to the principal’s office!  Do you hear me?”  I’m pretty sure the principal could hear him from here.  I imagined a roaring locomotive of words heading straight for me and I was tied to the tracks.
Perhaps I should explain something to you.  I have what is known as High Functioning Autism or HFA.  A lot of people call it Asperger’s Syndrome.  I can tell you more about it later but what you need to know now is that my brain can get overwhelmed under pressure.  Right now, Mr. Cochran was bringing on the pressure.
“I said, head to the principal’s office, NOW!”
I could no longer look at him.  I buried my head in my hands and started rocking.  Through my fingers I could see Zach get up.
“Zachary, sit back down!  Mr. Clarey GO TO THE PRINCIPAL’S OFFICE!”
I heard the door open and close.  Did Zach go get me help?
“William Clarey, this is your last chance.  Get up and go to the principal’s office or else.”  Mr. Cochran was right at my desk!
My thoughts were locked in a loop.  I blew it.  He’s overreacting. I can’t handle this.  I blew it.  He’s overreacting…
He grabbed my arm – the muscle part- just above the elbow like he was going to yank me from my seat.  I locked my grip on the desk and kept my head down.
He tugged.  “Move it! NOW!”
I gripped harder.
“Stand down Mr. Cochran,” came the calm but firm voice of Ms. Elliot.  She was the special education teacher.  Zach must have gotten her.  I hate the term “Special Education” but right now, Ms. Elliot was an angel.  “Continue with your lesson.  I’ll take care of Wil.”
“He needs to be disciplined!”  Mr. Cochran grumbled.
“He will be, appropriately.”  She touched me lightly on the back. “I am going to pull up a chair next to you Wil and when you are ready, we’ll talk.”  Then she just sat silently.  She knew me well.  She knew that, unlike a lot of people with HFA, I did not mind being touched by people I trust.  She also knew that I would come out of my “defense mode” (that’s what it is officially called) once things around me calmed down.
With the attention off me, I was able to come out of it in just a few minutes.  Ms. Elliot must have seen the change in me.  She’s good at that.  She tapped my shoulder, nodded towards the door and whispered, “ready?”  I followed her out the door.  Mr. Cochran kept talking – like Ms. Elliot and I were invisible.  Sometimes I wish I really was.  I won’t bore you with the details.  Let’s just say I had to call my mom that day and she had to take me home early.  I was so glad that it was almost summer!
Incidentally, Mr. Cochran doesn’t even know my real name.  Neither do you and I am not sure I want to tell you.  Let’s just say that I go by “Wil”, with one “l.”

Mom called Grandma and Grandpa Clarey.  They were “delighted at the prospect” of having me there for the summer.  They insisted on talking to me.  I hate talking on the phone.  Most of my answers to their questions were “Uh huh” and “okay.”  Sorry, I’ll never win any “Conversationalist of the Year” awards.  I finally was able to give the phone back to mom when I said I had to do my homework.
It was tough concentrating that night.  Earlier I was counting the days till summer.  A quick calculation told me that now it was 114 days until Summer is over!

Posted by Richard Solano at 12:43 PM No comments:

I am loving my time here at the Colorado Christian Writer's Conference in Estes Park.  The beauty is amazing, the advice is priceless and the opportunities are abundant.  Yesterday, I got some excellent advice on my writing that will take the Wil Clarey series to the next level.  This morning I had the opportunity to interview on AM91 KPOF Radio (airs next week during the morning show).  Now I am sitting with this view out my window and writing another entry on a devotional book I am putting together. 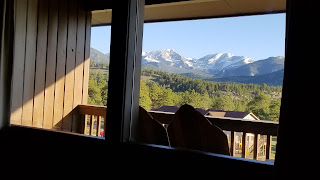 I decided to include today's entry as it is relevant to the conference.  The working title of the devotional book is "365 Super Short Stories."  Let me know what you think of it and if you want me to upload any other excerpts from that book.

As a Sophomore in college, I wanted to be a camp counselor for the summer.  I put in my application for Redwood Camp, where I had worked on the maintenance staff the summer before.  One spring day, the letter finally came.  I was (insert dramatic pause here) rejected.

Of course, I was disappointed.  I knew I could get a different job for the summer, but I really wanted to directly make a difference in the lives of campers.  I decided I would a have a word with the camp director.  I went to his house one evening and simply asked him what I had to do to be ready to be a counselor the following summer.  He gave me advice which I gratefully listened to.

That summer, I took a position as “linen man” at the conference center that was part of the same organization as Redwood Camp.  During the first week, I got a call from Redwood Camp.  One of the counselors decided that he could not handle the job.  The director was so impressed with my teachable attitude that I was the first replacement he thought of.

That experience reinforced what I had already learned about taking correction with an open mind.  Yesterday, at a writing clinic, an expert writer, Tim Shoemaker, pointed out several flaws in my writing.  I am genuinely excited to be able to take that advice and polish my manuscript.  With his advice, my book will have a better chance of getting published.  More importantly, it has a better chance at making a difference in my readers’ lives!

Posted by Richard Solano at 7:11 AM No comments:

Back Cover for Wil Clarey: A Kerryville Summer

With the Writer's Conference just a week away, I have come up with a back cover teaser.  What do you think?

Back Cover for Wil Clarey: A Kerryville Summer

What can a city boy do when he is forced to spend the summer on a farm?  That’s what Wil Clarey gets to find out.

When Wil’s mom gets a new job, he has to spend the summer with his Grandparents in Kerryville, Virginia.  Having spent his first 13 years in Southern California, Wil, who has High Functioning Autism, encounters adventures and surprises around every corner.  Strength he never knew he had emerges as he deals with life on the farm.  Will he survive the summer?  Might he even enjoy it?

Posted by Richard Solano at 6:46 PM No comments:

You ever have one of those weeks?  You know, the kind where everything happens at once.  In the past week, I have had to deal with 3 impossible situations at work, arranging an insurance roof replacement (the recent high winds in Colorado got us), planning a lesson for youth group this Wednesday, having a visit from my wife’s parents, running sound at church, and buying a car from my oldest daughter.  This coming weekend holds the treasures of cutting down an old tree and chopping it up and working on 2 or 3 cars.  One would think that I could not possibly add one more thing.

Then, Sunday morning when I got my iPad out to run sound, there was an email waiting.  My week got busier and I got happier.  I learned that I was accepted into the Intensive Fiction Writing Clinic.  I have since read the samples from the other five participants as well as some of the writing of our leader, Tim Shoemaker, and I am very excited for what I will be learning and the friends I will be making.

My hope and prayer is the the story of Wil Clarey will soon be reaching out beyond the walls of the Solano household.  Please pray that I will be able to prepare properly for the upcoming Writer’s Conference, that I would learn what I need to to write more effectively, and that God will open the right doors that would lead to publishing.

Thank you for your support and for being patient with me.  I will upload another chapter here soon.

May the amazing grace of God fill you with joy!


Posted by Richard Solano at 9:29 PM No comments: