As promised, here’s the first chapter of Book 2 of the Wil Clarey Series - School of Hard Knocks.

Be warned, it does contain a major spoiler from the end of the first book.  If you would like I digital copy of the first book first, I may be able to arrange that.  Email me at Solanowriting@outlook.com.

While this chapter has been edited and revised, it may still be revised further before final publication. It turned out quite a bit longer than my typical chapters.  I hope you enjoy it!  Let me know what you think.

Chapter 1 – Locks’ Locks
“C’mon Locks, work with me here.  Let us in!”  Mom was frantically punching the “unlock” button on the car’s remote.  Nothing was happening.
“Use the key.”  I was thinking Duh!
She tried the key on both sides.  It didn’t work.
“Are you sure this is our car?”  I started walking in circles.
She gave me “that” look.  “How many beat-up 18-year-old gold Tauruses do you see in this parking lot?  Besides, that’s our stuff in the back seat.”  She had a good point.
My mind, which works in strange ways, immediately asked myself if it was supposed to be “Tauruses” or “Tauri.”  Instead I asked, “What about the trunk?  Maybe I can crawl through.”
She tried the key in it.  Surprisingly, it popped open.  We pulled out enough stuff for me to climb in and reach the seat.
“There’s no release.”  I turned and tried kicking the seat down.  As hard as I tried, it wouldn’t budge.  A voice made me jerk my head up, bashing it on the edge of the trunk.
“Don’t break your car.”  The voice belonged to an old man in a Ford pickup who stopped behind us.  “I bet I can get it open.”
I crawled out, rubbing my head.  I was down for any solution that didn’t involve more pain.

I guess I should explain that we were at the Grand Canyon after our first day of traveling from California to our new home in Kerryville, Virginia.  Mom surprised me a month before when she told me she was buying a house there.  I had just spent the summer in the area and was loving it.  I was excited to be moving.
The past month was spent frantically packing our stuff and loading it into a big trailer that a moving company would haul to our new home.  That very morning, we took off in “Locks” (short for Goldilocks), our old Ford Taurus.
After eight hours on the road, we made it to Grand Canyon National Park.  It’s a big hole in the ground.  Okay, I gotta admit, it was pretty cool.  It’s sooo big!  We climbed up this old stone tower to watch the sunset.  It was crowded (which I hate) but the view was pretty amazing.  I got some pretty good shots with my new camera.
That brings us back to trying to get into the car.

Mom eyed the man with suspicion.  “How would you know how to do that?”
“Same thing happened in my daughter’s car.”  The man dug a small screwdriver out of his glovebox and started taking the back cover off his truck’s remote.  “Let me see your remote.”
Mom hesitantly handed it over.
“Your ignition lock was probably replaced at one point.”  The man explained as he transferred the battery from his remote to ours.  “The trunk shouldn’t have opened but maybe they took the ignition lock and the trunk lid from the same junker.  That sort of thing happens all the time.”  He pressed the unlock button.  The car unlocked.  “Keep the battery, I’ve got a spare at home.”
“How can I thank you?”
“No thanks needed.” He smiled.
I imagined him saying in a country accent, “Aw shucks, it was nothing.”
“Have you had dinner yet?”  Mom surprised me.  She hardly ever talked to strangers, much less invited them to dinner.
He sat there and looked at her.  Then at me.  Then the ground.  “I would be honored if you would join me and my wife for dinner.  But I won’t let you pay.” He said, that last bit in a serious voice.

That’s how we found ourselves enjoying a late dinner with people we just met at a Denny’s in Flagstaff, Arizona.  We followed Lou and Myra, the elderly couple, all the way to the restaurant.  They took a while to get out of their pick up, so I ended up pacing by the door of the Denny’s waiting with mom.  “Do we have to have dinner with them?”
“It won’t hurt you.  They’re nice people.”
Lou walked up and shook mom’s hand.  He then reached for mine.  I know it must seem rude, but at that point in my life shaking a stranger’s hand was horrifying to me.  I looked down and turned away.
“I’m sorry.  He has Asperger’s and shaking hands is not something he has gotten over yet.”  That’s mom – always coming to my “rescue.”  Embarrassing, but effective.
“No problem.”  Lou smiled and opened the door.
Throughout dinner, Myra sat quietly, not saying much, a lot like me.  Lou, on the other hand, could not stop talking.  We heard about the old cars he restored and how Flagstaff got its name, and what Native American Tribes were here, and which one he came from.  You get the idea.
At one point he asked, “Are you praying people?”
Mom tilted her head.  “I guess you could say that I am.  Why do you ask?”
“I was just curious.  Do you ever pray for Wil’s healing?”
Oh man, what is she going to say?  I knew mom well enough to know that she didn’t like that kind of question.  I think she calls it a “trigger” question cause it can make her explode like a gun.
To my surprise, she stayed calm.  “If Wil was injured or sick, I would pray for healing.  I don’t believe that having Asperger’s is something that he needs healing from?”
“I’m not sure I understand.  Isn’t it a disability?  Wouldn’t life be easier for him without it?”
“Life would probably be easier if I were stupid.”  She stopped for a moment.  “I’m sorry, that came out wrong.”
“Don’t worry about it.  I’m just trying to understand.”  Lou glanced my way.
I felt like disappearing under the table.  Part of me wanted to speak up like I did last summer on the Today Show.  But this was different, in person with a total stranger.  I think Mom handled it well.
“People with Asperger’s think differently.  Their brains process information in unique ways.  That makes some things harder and other things easier.”
“So, you think that the positives outweigh the negatives?”
“I don’t think you can break it down to simple positives and negatives.  Every person is unique.  We all have our strengths and weaknesses.  I’ll never be a genius, but, that doesn’t make me any less valuable.”
“I think I may understand.”  Lou actually scratched his head like it helped him think.  “Maybe the better prayer would be that Wil be able to become the best person that God intends him to be.”
Mom smiled.  “That’s probably the best prayer for any of us.”
I couldn’t help but agree – at least in my head.  I wasn’t about to say anything.

It was late when we got to the motel.  Mom went straight to bed while I emailed Hannah, my best friend in Kerryville.  You’ll hear more about her later.  She lives on the farm next door to my grandparents.  We’re kinda opposites but somehow we became good friends right away.

Hi Hannah,
We finally made it out of LA.  We left early and made it to the Grand Canyon in time for the sunset.  We went up on top of an old tower to see it.  The Grand Canyon is a really big hole in the ground, but it was pretty cool.  I attached a couple pictures.
Mom had problems with the car.  I’ll fill you in when we get there.  We finally got to our motel around 10pm.  Mom is already snoring, and I’m really tired.  I might fill you in more tomorrow.
Goodnight,
Bestie Wil

Posted by Richard Solano at 11:19 AM No comments: 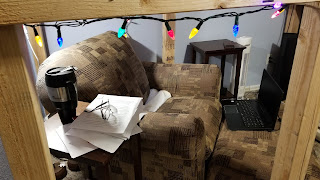 This is what my writing nook has looked like most of the time lately.  Empty!  Life has been busy.  Since the first, I have written one chapter of Synchronized.  I also spent a good deal of time setting up the new web-site (which still needs a lot of work).

Tonight, I was chastised by the thumbnail that tagged along with a message I sent that referenced this site.  It was the picture of my Christmas story in the trash.  Time to move forward.

I am going to continue to write Synchronized.  I am excited about that!  What may be of more interest to those of you on this site is the fact that I am going to start the rewrite process of Wil Clarey: School of Hard Knocks!  I think I have had enough time to distance myself from the first writing.

Right now, most of it is in such bad shape (my daughter/editor says it's some of the worst writing she's seen from me) that I have my work cut out for me.  The story is there, but there are grammatical errors galore and significant inconsistencies (from changes in mid-story).  I am also wrestling with Wil's personality development.

It is a heavy book in which Wil goes through some serious changes.  Probably my biggest struggle is keeping it fun to read while dealing with serious issues.  Your ideas and prayers are welcome!

I will post a few excerpts here.  Expect the first in a couple of weeks.  Thanks for your patience in the meantime!
Posted by Richard Solano at 6:25 PM No comments:

I have officially launched a new website!  You can find it HERE!

I will continue to post blogs about the Wil Clarey series here.  The new page will link to here and will have blogs about writing in general and updates for Synchronized.  Come check it out and send me suggestions for making it better!

PS - if the link does not work, copy and paste solanowriting.com to your browser.
Posted by Richard Solano at 1:02 PM No comments: